Laundry Bar presents ‘THIS IS NOT A DRILL’ Bushfire Relief Fundraiser

With the world in shock by scenes of devastation and despair, Australia’s ravaging bushfire season continues to rage on.

At the time of this article, 28 people have died nationwide and more than 1.3 million hectares have been burnt with over 2000 homes destroyed.

Moreover, according to the World Wildlife Fund (WWF) Australia an estimated 1.25 billion animals have lost their lives, including thousands of koalas, kangaroos, wallabies, kookaburras, cockatoos and honeyeaters.

Currently there are almost 3000 firefighters in New South Wales alone who are battling blazes the size of small European countries.

In light of this devastating disaster, TLF has teamed up with Melbourne’s popular Hip-Hop/Rap nightspot Laundry Bar, and became an official sponsor of their upcoming fundraiser event. 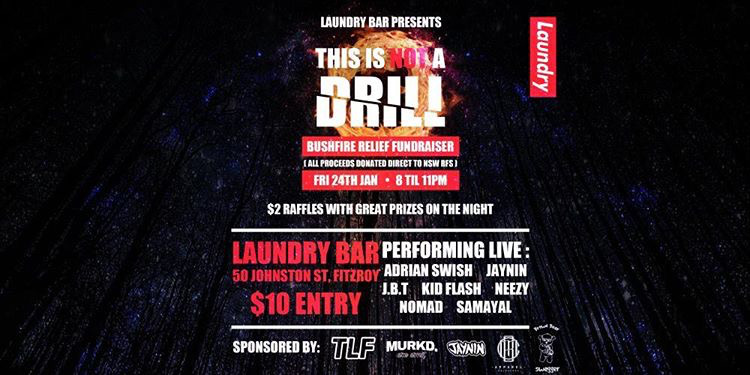 The night is set to feature a massive lineup showcasing some of Melbourne’s most talented Hip-Hop artists, with all the proceeds being donated directly to the NSW RFS.

Additionally, there will be $2 raffle tickets available for your chance to win some awesome prizes!

In preparation of the event, TLF invites you to familiarise yourself with each artist (and their music) by checking out their latest release below:

Adrian Swish
SINGLE: Following a monumental 2019, Adrian Swish continues to shine as he pushes boundaries and collaborates with various artists from across the globe. His latest work is seen on Vincent Ernst’s record ‘Wild Tonight‘, a track with an extremely upbeat tempo that resembles the likes of Chris Brown.

Samayal
SINGLE: Formerly known as “A.Y.E.R”, Samayal brings powerful, delicate and at times vulnerable vocals, sending the listener on an emotional rollercoaster. His latest single ‘O.V.E.R‘ enlists Jaynin and 4NX$ for a compelling record about heartbreak.

YOU CAN RSVP AND GET YOUR TICKETS VIA OUR FACEBOOK EVENT HERE!